Butenschoen’s attempt to sweep the trio of male trotting divisions with Suit and Tie was thwarted by none other than Centurion ATM ($2.10). After rated patiently by trainer-driver Åke Svanstedt off the top pair through a :56.4 half mile, the son of SJs Caviar-ENS Tag Session began his move in the final three-eighths, taking over in upper stretch and holding off a late closing Sixteen Encores (Callahan) in 1:54.2. Centurion ATM, the Peter Haughton Memorial winner, was well in hand approaching the post, winning by 1-1/4 lengths with much in reserve. 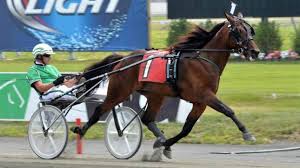